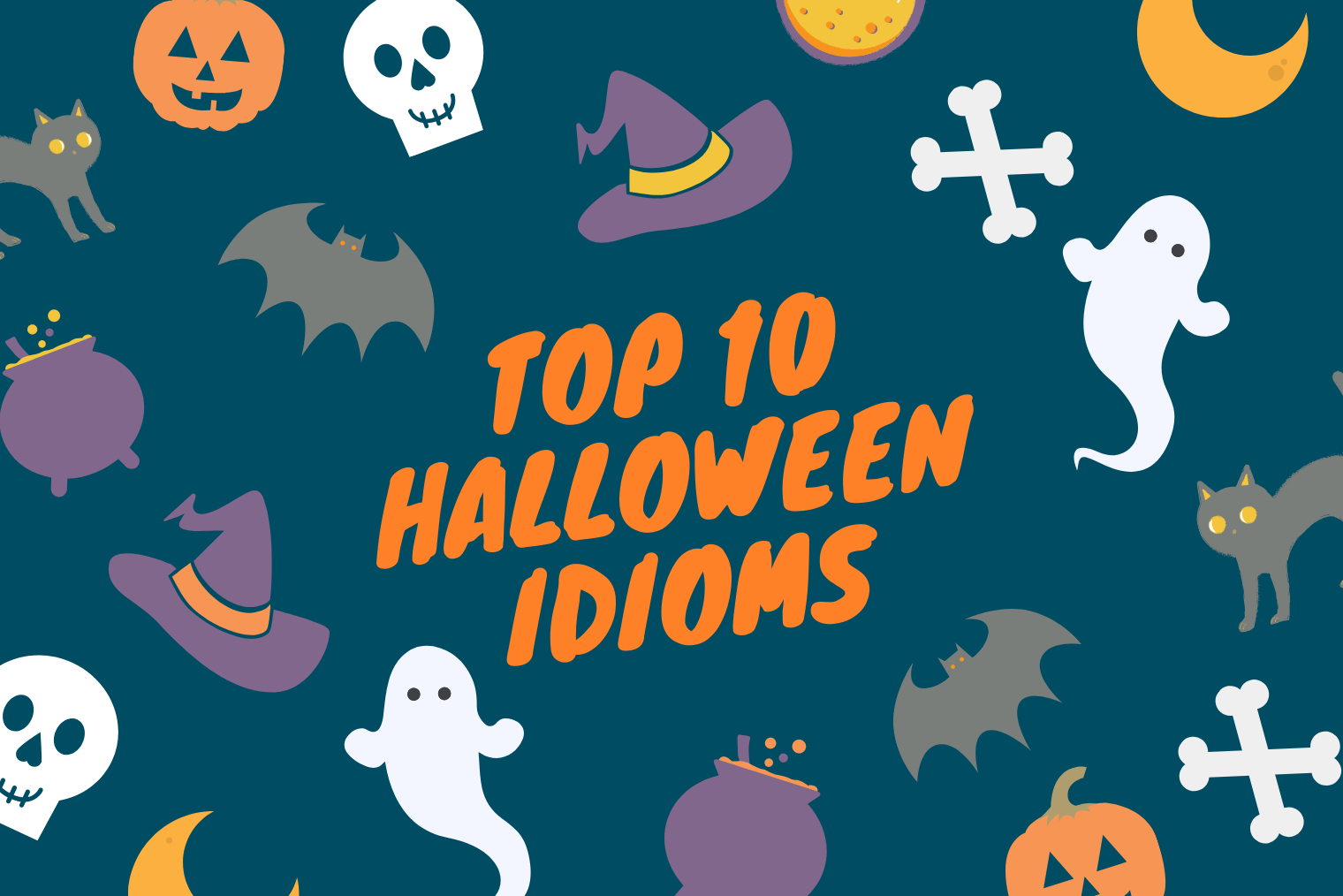 Happy Halloween everyone – we hope you’re having a spooky day! Read on (if you dare) to find out our top 10 favourite spook-tacular idioms and their meanings. We hope they don’t give you a scare!

Suggested activities for using idioms in the classroom

You can find more suggested activities in How Idioms Work by Yvonne Clarke and Martin Jones.

And now, it’s time for some spooky idioms! As well as the idiom, meaning, and origin, there is also a list of useful websites and articles at the end of this blog, so be sure to check them out.

1. SKELETON IN THE CLOSET

Meaning: an embarrassing fact or scandal that someone wants to keep secret
Example: Wherever he goes, he is worried that someone will find out about his skeleton in the closet.
Origin: The Phrase Finder had a lot of information about the etymology of this idiom. It was first referenced in 19th century England by journalist William Hendry Stowell. “The dread of being the cause of misery to posterity has prevailed over men to conceal the skeleton in the closet…” (The Eclectic Review, 1816).

The phrase was then more widely adopted into English thanks to William Makepeace Thackeray, a Victorian author who frequently used the phrase in his writing: “… which will show us that they have a skeleton or two in their closets.” (The Newcomes; Memoirs of a Most Respectable Family, 1845). The Phrase Finder further suggests: “What isn’t clear is whether the origin of the phrase lies in fiction, or with real life, so to speak, skeletons.“

Meaning: a deserted place where there are few or no people
Example: I woke up at 5 a.m. to go for a run. It felt like a ghost town, I didn’t see anyone!
Origin: This phrase can refer to an actual town that used to thrive, but now has little to no population. However, it can also frequently be used with a simile to describe somewhere as ‘like a ghost town’, as in the example above.

However, in terms of the origin – it’s a little tricky. Merriam-Webster states that the first known use of ‘ghost town‘ was in 1931, but I can’t find any information to support this. Author Lambert Florin defines ‘ghost town’ as “a shadowy semblance of a former self” (source), which could suggest why the word ghost was originally used to describe such a town. To use another idiom – the jury is still out on this one!

Meaning: someone who is easily frightened
Example: Don’t be such a scaredy cat … skydiving is fun!
Origin: There are a lot of different suggestions for the origins of this phrase online. Know Your Phrase say that it most likely comes from the fact that cats are easily scared by things. The same source, and the Online Etymology Dictionary suggest that the first use of the word ‘scaredy-cat’ occured in 1906. It was used in the book Billy Bounce by W.W. Denslow: “That is scaredy cat, and she will never come back”. However, Merriam-Webster states that its first known use was in 1948, which may be a reference to the short cartoon Scaredy Cat which was published in 1948. Source.

It’s also worth nothing that the phrase ‘fraidy-cat’ can also be used to mean the same thing, and is said to have first appeared in print in 1897.

Meaning: very afraid, to the point where they are incapable of movement
Example: Aza didn’t want to go on stage; she was scared stiff.
Origin: The use of the word ‘stiff’ most likely refers to the idea that if something is stiff, it cannot be moved. However, it could also be a reference to another use of the word ‘stiff’, meaning a dead body.

This was a hard phrase to find any sort of solid information for. The Online Etymology Dictionary suggests that the first recorded instance of this phrase occurred in 1900. However, I couldn’t find the significance of this date on any other website. The Phrase Finder loosely references this phrase when talking about the origin of ‘scared out of my wits’.

5. WOULDN’T SAY BOO TO A GOOSE

Meaning: shy or nervous
Example: I don’t think James would do that; he wouldn’t say boo to a goose.
Origin: As with lots of words, it seems that this phrase has changed slightly over time. Word Histories clarifies that ‘boo’ refers to a later form of ‘bo‘ – an exclamation meaning to frighten, as opposed to an expression of disapproval.

The first instance of it being used in this context is: “To be able to say Bo! to a goose is to be not quite destitute of courage …” (Notes and Queries, 1870). The website also states that the earliest printed version uses ‘shoo’: “who can scarse say shue to a goose.” (A Seconde Admonition to the Parliament, 1572).

Meaning: very good looking
Example: Friend 1: Do I look alright in this?
Friend 2: Are you kidding? You look drop 👏 dead 👏 gorgeous!👏
Origin: In English, there are a lot of phrases which use the word ‘dead’ idiomatically! Drop-dead gorgeous is just one of those. In this phrase, ‘drop-dead’ is used as an intensifier, to exclaim astonishment about just how gorgeous someone is. The Phrase Finder references a report that was printed in the Shreveport Times in 1972. “Cher, drop-dead gorgeous in a second skin of silver, pink, purple and red sequins.”

Meaning: a person who tends to stay up late; an evening person
Example: He didn’t go to bed until 3 a.m. – he’s such a night owl.
Origin: This was originally simply a synonym for ‘owl’, as owls are nocturnal animals, meaning they are awake at night. However, the use of the term, when not simply talking about owls, was first used by William Shakespeare in a poem: “The dove sleeps fast that this night-owl will catch“. Source.

8. DIG YOUR OWN GRAVE

Meaning: to do something that will cause you harm or problems in the future
Example: Student 1: I think I’m going to skip this lecture again.
Student 2: Alright, but you’re digging your own grave.
Origin: A research paper written by Arvo Krikmann suggests that this phrase could originate in a proverb: “Whoso diggeth a pit shall fall therein.” (Proverb 26:27). However Dictionary.com suggests it originated in the first half of the 1900s but gives no further information. Bit of a tricky one, and still up in the air!

Meaning: a work shift that happens overnight
Example: I have to work the graveyard shift tonight; I’m really not looking forward to it.
Origin: The Phrase Finder talks about the questionable origin of this phrase so take the following origin story with a pinch of salt …

In the olden days in England, it is said that they were running out of places to bury bodies. They therefore started digging up coffins and moving the bones to ‘bone-houses’. Whilst doing this, they discovered scratch marks on the inside of the coffins, signalling that people had been accidentally buried alive (yikes). To stop this from happening, they attached a string around the wrist of corpses which was then attached to a bell. It is said it was someone’s job to sit in the graveyard all night (a ‘graveyard shift’) and see if the bell rang. Spooky stuff.

However, the first instance of this idiom appearing in print was in the US newspaper The Salt Lake Tribune in 1897: “… This month Sergeant Ware takes the morning relief. Sergeant Matt Rhodes the middle and Sergeant John Burbidge the graveyard shift.”

Meaning: used to express that you strongly oppose something, or won’t allow it to happen
Example: Person 1: I thought we were going to split the money if we won.
Person 2: Ha, over my dead body.
Origin: Not much is known about the origin of this phrase. However, it has been suggested that it was in use during the 1800s as a “common hyperbolic expression” used in jokes. ‘Hyperbolic’ means that is is used in an exaggerated way for effect. Source.

Special thanks to our talented illustrator, Doug, for creating these spooky illustrations. You can find out more about Doug’s illustration process here.